The earliest name for this body of water through which Samuel de Champlain famously passed through in 1613 was “Muska-dag-a-ba-sink,” meaning “lake of the big fire” in native Ojibwe, likely in reference to the wonderful sunsets visible from the northeast shore. (The Huron nation of Champlain’s era was driven out by Iroquois warriors from the south in 1649, allowing Ojibwe nomads from the north to populate the wilderness.) 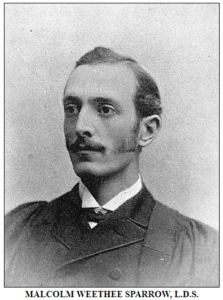 The only record of the origin of the name “Sparrow Lake” comes from the preface to an unpublished book of amateur poetry by Malcolm Weethee Sparrow in 1924. Malcolm Sparrow was a summer resident from Toronto who undertook some research after being asked repeatedly if the lake was named after his relatives. At that time, there was no living person who could vouch for the origin of the name, but two stories were still being circulated about a man named Sparrow.

In both stories, an Englishman named Sparrow travelled periodically to the lake by canoe with the aid of native guides—”a young man, of good family, wealthy, and apparently in poor health, but with a propensity for gambling.” He was reportedly well known by the native guides and the few white settlers in the area as a friendly man. However, on one trip he was reported missing by his guide, who then promptly disappeared, leading to speculation that Sparrow had been killed “after an altercation over cards.”

The other legend circulated among the natives recounts a mysterious white girl who was frequently seen canoeing alone on moonlit nights near the north shore of the lake, where she lived with her father, “a white-haired trapper.” Her Christian name was Aleeka, but the natives spoke of her as “Wa-nee-moo-sha,”—Spirit of the Moonlight. She was a “very extraordinary personage, shy and illusive, yet affecting the Indian costume, she visited the Indian camps, if any of the children were ill, to minister unto their sufferings.” According to legend, one of Sparrow’s native guides, who was enamored of the girl, became upset with young Sparrow’s interest in Aleeka and killed him in a fit of jealousy.

In both stories, Sparrow’s corpse was never recovered, and the body of water became known as “Sparrow’s lake,” later shortened to Sparrow Lake.

By Steve Stanton, 2018, adapted from the author’s manuscript, “The Legend of the Lake,” by Malcolm Weethee Sparrow, Toronto, January 2nd, 1924 , as photocopied in A Legacy Almost Lost, Kilworthy Historical Society, 1992.