This property at the very north end of Sparrow Lake was owned by Laughton Mclean and later John Franklin Jr., son of the pioneer John Franklin. Balmoral Hotel was built by Roy Mortimore in 1922, and was operated by the Mortimore family for many years. A Mr Bernstein operated the lodge in the 1940s-50s. It featured a vintage steam engine to power the laundry and had a dance hall close to the lakeshore.

Stephen and Georgina Ladanyi purchased Balmoral in 1957, and ran it together until 1967 as a summer resort for Hungarian people. At that time, the main lodge had 29 rooms, a snack bar, a big living room, beautiful wooden dining room, two kitchens and a large covered porch. There were also three free-standing single-room cabins, a five-unit row of cottages and a duplex that had two-bedroom apartments, a dance hall with a piano and a ping-pong table that was often put outside, a laundry cabin, a tennis court, a sand box and swing set, along with many wooden rowboats to rent and a houseboat that took guests on trips around Sparrow Lake and up the Severn River to the locks. In later years, Stephen Ladanyi winterized the building and operated it as a nursing home until his death in 1997. The vacant property fell into disrepair, and the building was torn down in 2016. 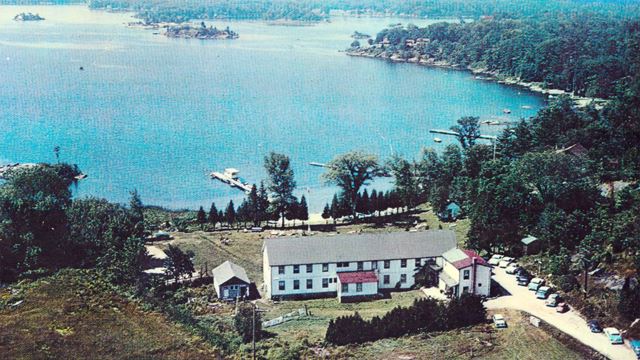 Compiled by David Stanton and Steve Stanton (with credit to files from Gravenhurst Banner.)