In 1852, Henri Quetton St. George, a Toronto wine merchant and land speculator, was granted 450 acres of land known as Severn Landing to the north of Lake Couchiching where the lake drained over waterfalls into the Severn River. The terms of the land grant called for St. George to build a sawmill and grist mill at the shore to encourage settlement. A water-powered sawmill was constructed in the centre branch of the Severn River, and in 1856 St. George acquired the local timber license for 80 square kilometres. Logging became the main activity in the area, and local settlers referred to the location as “the mill.” In order to bypass the falls at Severn Landing and Wasdell Falls 5 km to the northeast, a portage trail led from “the mill” to “the bridge” at the Severn River, which flowed northwest into Sparrow Lake. 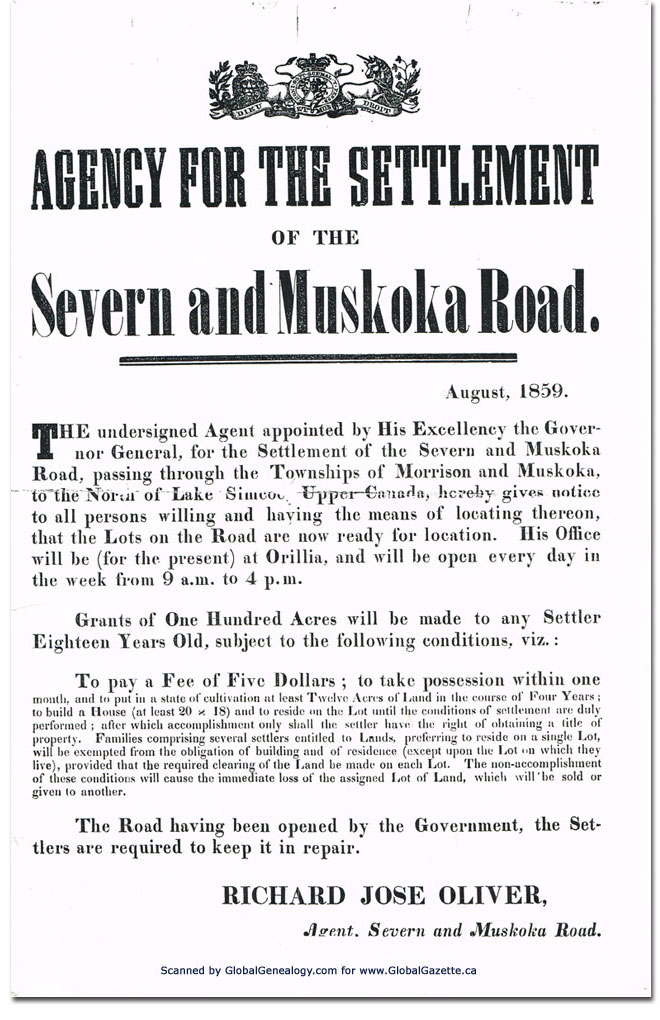 In 1858, construction began on a colonization road from Lake Couchiching northward into the Muskoka wilderness. Free land grants of 100 acres were offered to homestead settlers who would agree to clear and cultivate at least twelve acres of land. In 1860, the Muskoka Road was planked all the way up to the Muskoka Wharf at Gravenhurst, but the three-inch pine boards quickly deteriorated from the horse and carriage traffic. The first census of 1861 reported 297 landowners in the newly surveyed Morrison and Muskoka Townships (not including women and children), and land grants were still being registered in the area. The sawmill property at the north end of Lake Couchiching became a public transportation port with daily steamboat trips to Orillia, where the only grist mill was available for settlers to grind their grain into flour for the winter. 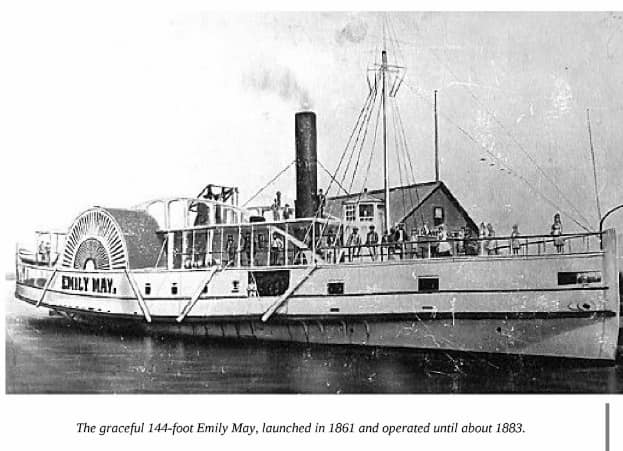 When a post office was established in 1868, Ojibwe Chief Bigwin gave the native name Washago to the growing community (pronounced Wah-shay-go, meaning “sparkling waters”). In that year, Henri St. George sold the sawmill and all the property in the village for the sum of $8000 to lumberers Robert Cozzens and Robert Hamilton, who then sold it three years later to Abial Marshall. A grist mill was finally built in 1872 to fulfill the requirements of the original land grant, and in 1873 Marshall had a village plan drawn up and began selling lots for $10 and mill sites with water privileges for $25. Also in 1873, the Muskoka Branch railway extension reached Washago from Barrie and continued building track north toward Gravenhurst. In May 1874, the Orillia Expositor reported that “Washago is improving rapidly and many new frame buildings are being erected.” The local mill dam provided water power for a grist mill, a shingle mill, a sawmill, and a pump that supplied a water tank for the steam locomotives of the Northern Railway of Canada.

Compiled by Steve Stanton, 2018, from SLHS archives with credit to “Severn River,” by James T. Angus, Orillia, 1995, “Gazetteer and Directory of the County of Simcoe,” Toronto, 1866, www.ruralroutes.com and www.canada-rail.com.