Captain Thomas Stanton launched the first steamboat on Sparrow Lake in 1875 and settled with his wife Ellen (Franklin) and their young family on the west shore of Sparrow Lake. They lived in a log cabin and carved out a life for themselves. Captain Thomas made daily trips upriver in his small boat named the Pioneer to Severn Bridge (about five miles), primarily hauling logs to the sawmill for local lumber companies. In 1884, the Stantons sold their homestead and purchased land on the south shore of Sparrow Lake at the former mill site of Wm. B. Strathearn, which later became the village of Port Stanton.

Stanton converted the old shingle mill into a sawmill and began supplying construction materials to the growing community, in addition to his regular job piloting the Pocahontas steamboat for the W.P. Christie Lumber Company. He later purchased the Pocahontas for his own use. The Stantons took in boarders and began building cabins for an influx of tourists, and their home became known as Stanton House resort. Notice the water tank for water pressure and the windmill that pumped the water up from the lake.

In 1895, Stanton and his sons Frank and Albert founded the Sparrow Lake Steamship Line, and in 1904 they built a 70-foot steamboat in a bay to the west out of forest timber with boards sawn on the Stanton sawmill. This 70-foot boat called the Lakefield could carry 200 people and was to become the flagship of their fleet. Captain Tom became active in municipal politics, becoming Deputy Reeve and later Reeve of the township. When the Canadian Northern Ontario Railway planned an extension in the area, he used his influence to redirect their line north about 1/2 mile, so that it would touch the shore of Sparrow Lake, and he also donated his land for this diversion.

In 1905, Albert Stanton enlarged his house next door to accommodate overflow tourist traffic from Stanton House. The new resort was named Lakeshore House. The master plan came together in 1906 when the Canadian Northern Ontario Railway reached the community and established scheduled runs for vacations to the north. A Sparrow Lake Station was established 100 yards from the Government Wharf, and the Stanton Bros. Store, owned and operated by Frank and Bert Stanton, was located between the station and dock. 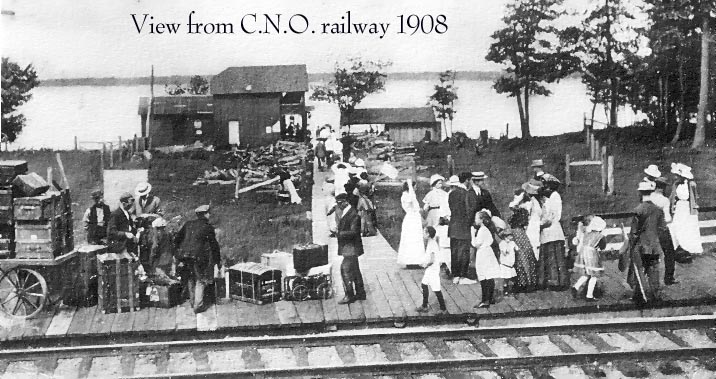 A Post Office was added in 1907 and appropriately named Port Stanton. Frank Stanton became the first Postmaster and served until he retired in 1951. This area became the hub of the tourist industry, linking a mainline rail service to a popular waterway, and Sparrow Lake was widely promoted by the railway as a fine tourist area for vacationers from cities in both Canada and the United States. The Sparrow Lake Steamers Lakefield and Glympse handled the major traffic loads to resorts and cottages on the lake from 1906 to 1914.

To meet the needs of the booming tourist industry, the Stanton family went on to build three more resorts at Port Stanton in the following years: Sparrow Cottage, Bayview Lodge, and Wildwood Inn.
Captain Tom Stanton died in 1907, and his wife Ellen with children Alice, Marion, and George carried on the original Stanton House resort. She donated land and was a key figure in building the Anglican Church of the Good Samaritan located about 100 yards east from the Stanton Bros. Store next to the hotel. Ellen died in 1910 just weeks before the church officially opened. 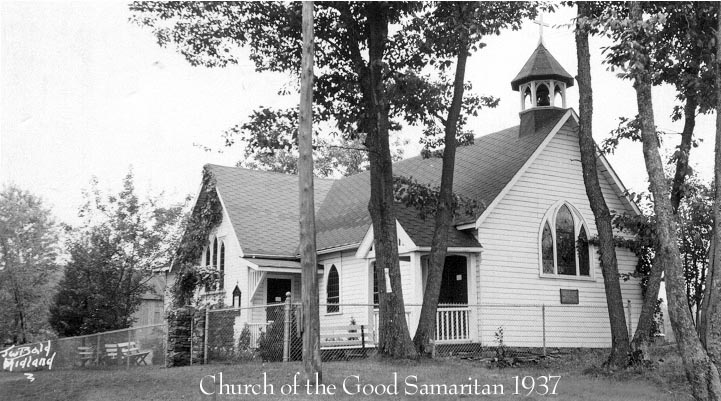 The Railway Station was dismantled in 1955, although the trains still pass by every day. The introduction of motorcars and roads ended the need for a boat delivery service, but cruising boats travelling the Trent-Severn Waterway still call in at the Government Wharf to gas-up or park overnight to visit the Stanton Bros. Store and restaurant. The Church of the Good Samaritan still holds Sunday services for the benefit of the tourists in the summer. The Sparrow Lake Historical Society commissioned a memorial plaque to recognize and honour Captain Tom Stanton and his wife Ellen and their family who built Port Stanton and contributed greatly to the development of Ontario’s tourist industry. The plaque was dedicated with a ceremony on August 22, 1999.