The first bridge over the Severn River into the Muskoka frontier was built in 1857 where a crude colonization road ran north from Lake Couchiching to Muskoka Falls, crossing the Severn River just north of Washago. The original Muskoka Road followed the route of today’s Cowbell Lane, skirting a rocky ridge that proved impassible to early travellers. The wooden structure underwent numerous repairs over the years, until it was replaced with a steel bridge in the mid-1890s.

The first settlers to be given land grants in 1858 were James Jackson from England, William Johnson from Scotland, and John Young from Scotland. James Jackson settled on 95 acres of land, building a simple log cabin that doubled as both residence and store. In 1860, Jackson was appointed the first postmaster in Muskoka, and his cabin became the local post office. By 1865, Severn Bridge boasted several hotels, a church, a schoolhouse, a community hall, and multiple stores, with a year-round population of 200. In later years, Jackson operated the telephone exchange, and was authorized to give out marriage licences as a justice of the peace. The simple log shack was eventually replaced by a large wood-frame building, which continued to serve the combined functions of residence, post office, and store.

The tourism industry boomed in the mid-1870s, when the Northern Railway pushed its line up to Severn Bridge. Every summer, hundreds of affluent families passed through Severn Bridge on their way to one of Muskoka’s many wilderness resorts, and in 1874, steamships began operating from the village, making daily runs from the village to resorts on Sparrow Lake. To exploit this trend, Jackson added a fleet of canoes and boats to his store, in the process becoming the first marina operator in Muskoka.

James Jackson passed away in 1894, but his son James II continued the family business, buying out brother Joseph’s interest for $1,870. He built a hotel on the bank of the Severn, “The Riverview,” which could accommodate up to 40 guests. The wooden building was tragically destroyed by a fire in 1906 that began in the village mill and rapidly engulfed most of the community. At least a dozen buildings were destroyed or damaged in the inferno, an unprecedented catastrophe for the small village. 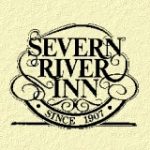 With the assistance of his brother Joseph, a local carpenter, James rebuilt the hotel in brick with a new name: the Severn River Inn, and ran the hotel successfully until his death in 1942. His son-in-law, Arthur Fawcett, who had married Jackson’s daughter Marjorie, took over the operation. He in turn ran it until his retirement in 1972. A string of owners subsequently came and went over the years, until Patricia Raymond purchased the badly neglected building in 1981, and restored the Severn River Inn to its former glory, preserving the turn-of-the-century pillared verandah and old-fashioned glass storefront, which provide rare examples of a pioneer inn and general store architecture. Raymond did such a commendable job that the Town of Gravenhurst designated the inn a building of architectural and historic importance under the Ontario Heritage Act.

(Compiled by Steve Stanton in 2017, with credit to files from Bracebridge Examiner and Huntsville Forester.)