John Everbeck was born in Germany in 1835. In 1859, he arrived in “Berlin” (now Kitchener) with his friend Adelbert Lehmann from Oldenburg, Germany, because they had been told that there were lots of Germans in that area. After a year in the Kitchener area, the two men came up to Orillia to buy some land. They found the property near Lake Couchiching too expensive, but then Adelbert found 200 acres of forest on the north shore of Sparrow Lake (on the site of Silver Pines restaurant today), and John Everbeck purchased land nearby at the mouth of the Kahshe River because he wanted to build a sawmill. (With credit to Kathinka’s Story, by Ursula Soper.) 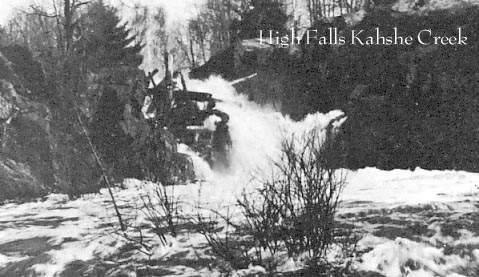 The first sawmill in Morrison and Muskoka Townships was established by John Everbeck in 1861 at the rapids on the Kahshe River. It used a water-powered Muley Saw, and up-down sawmill with a straight blade sliding between wood guides top and bottom. Muley saw blades were made of heavier gauge steel than the earlier English sash-frame sawmill blades. The name may have originated from the German muhl-sage/mill saw. (From ledyardsawmills.org/historic technology) In 1865, when Michael Clipsham needed lumber to build his Blacksmith and Wagon Shop on the new Muskoka Road, he bought 14″ stock pine delivered five miles over an ox trail from the sawmill for $6 per thousand feet. (From Harry L. Clipsham, 1963)

From the letters of Kathinka Lehmann in 1863: (Orillia Packet & Times, 1969)
“It is a great joy to feed (Adelbert’s friend, John Everbeck); his old housekeeper certainly doesn’t spoil him and so he loves everything I offer him. Now he has decided to go to Germany this fall and return here in the spring with his young bride…I don’t even like to think of Everbeck’s departure. I am afraid we will both miss him very much this winter. He is with us so frequently and I like him better all the time. He is a very pleasant conversationalist and true friend…Everbeck likes it in our home too. He often comes after dark, and after we have talked till about 10, he sleeps in the barn or in the new house on top of the sawdust. In the morning he has a good cup of coffee and then he leaves.”

As reported in The Orillia Expositor in 1867:
“Word has been received that the sawmill situated on the Kos-she-she-bog-a-mog River, near the outlet into Sparrow Lake was completely destroyed by fire. The mill was leased for a term of years by Mr William Hatch from the proprietor, Mr Everbeck, who is at present absent in Germany. The loss will fall heavily on Mr Hatch, who had upwards of 100,000 feet of lumber consumed. The loss to the owner will be approximately $3000. No insurance, origin of the fire unknown.”

Henry Arens purchased this property at the mouth of the Kahshe River in 1873, and made some improvements to the original homestead. He sold it to Michael Clipsham in 1883. John Everbeck’s house is the oldest structure still standing at Sparrow Lake. 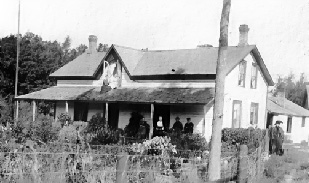